skip to main | skip to sidebar

Believe it or not, I spent today (Wednesday) working on the presentation for tomorrow. Made a bunch of nice sketches, but no new data or analysis on past data. We are supposed to present tomorrow at 2:00.
Posted by Alex at 8:40 AM No comments:

Today (Tuesday) is just another day for preparing my presentation for later in the week -- nothing new to report on.
Posted by Alex at 6:17 AM No comments:

Blogging and Preparing for the End...

I spent all day today (Monday) first in updating the blog from all of last week and then in working on the presentation which will probably be on Thursday. No real new data or anything, though hopefully I can have something on Wednesday or Thursday to do with the waist of the beam and frequency dependence.
Posted by Alex at 6:14 AM No comments:

Aluminum Letters and Realignment of Microscope

Keeping the same exact setup as yesterday, Antoine wanted to look at what would happen if we placed an aluminum cutout of the letter "F" in the waist of the THz beam today (Friday). The basic idea is that we have a shape with easily-distinguishable features that we can put in the way of the beam to see if/how it effects the beam. Since the cutout was aluminum (with a paper back for support), we expect the THz to reflect off the letter and then we would not see this reflected light at the receiver.

This would be really interesting if it worked, as we would be able to build a profile of the resultant beam due to such an obstruction in the way. To look at this theory a bit, I made scans in the y-direction at two different x-positions -- x = max (16.5 mm) and x = 14.0 mm. For the scan at x = max, I used the scan from yesterday as a reference (which is maybe not the best reference), and for the x = 14 mm scan, I took a scan with the "F" in place and a scan with it removed to use as a reference. The only other problem with using such a scan for the reference is that the "F" is held in place with plastic wrap in a frame, and so there is going to be some reflection due to the plastic wrap. The plot for the x = max is shown below.

There seems to possibly be some sort of feature showing up around where the center of the beam is located, though it is not very easy to tell. One big problem ends up being that I do not know where I am scanning along the letter, so I do not know what features to be looking for. I think maybe the best thing to do with this is to be able to take some sort of a ratio of the two signals to see what the relative difference is of the two at each point.

The next plot shows the data I took at x = 14 mm (where the reference was taken right after the scan with the "F" in place).

It is very easy to see that these two scans are extremely similar in almost every way to each other. The only real difference comes in the relative amplitude of the signals, but that is probably due to the plastic wrap used to hold the letter in place and not anything else.

It is an overall very interesting thing to be looking at, though I think the best option is to be able to take a full roster scan of the cross-sectional area of the beam -- both a reference and one with the letter in place. I would like to look into this more, though I will have to see what time permits.

After taking these scans, Antoine wanted to adjust the parabolic mirrors to see if he could correct some of the skewness that I saw in the x-direction scan from earlier in the week. After he adjusted the mirrors, here is the scan that I acquired.

The shape is, in general, much more like what we would expect for a Gaussian beam, but is rather clearly skewed to the left. Also, for the "edges" of this scan, I have already mentioned that we can ignore them due to the lock-in and how it is working. Overall, the shape looks better, and if anything else, then this should suggest that this technique of profiling is indeed rather useful and with some more work might become a very accurate way of profiling such a beam.

In order to see how this scan differs from the scan taken earlier in the week, see the plot below.

The most important thing to notice from this is that changing the parabolic mirrors around and realigning the microscope will result in a change in beam shape to some extent. Adjusting the setup and then doing a scan by hand to test the profile is maybe not the easiest way to do this, but it is definitely a rather straight-forward way to see how the beam looks.

I hope to maybe look into some of these things a bit more in the final week, though there are a lot of things which I may focus on -- the waist size as a function of frequency, the N2 data, the "F" in the beam, etc.
Posted by Alex at 3:07 AM 2 comments:

A Better Scan in the y-direction

I spent most of today (Thursday) in catching up with my notebook and MATLAB graphics from this past week, though I was able to adjust the lens and stage in order to take a better range of data in the y-direction. The idea is pretty self-explanatory, so I do not feel as though I need to go into it too much -- I made it possible to scan over more distance in the y-direction by moving the lens.

The new y-scan is shown in the plot below. The second plot which directly follows is simply this new scan and the scan from yesterday.

It is pretty obvious that the two scans from today and from yesterday are very similar, with the scan today being a bit more symmetrical. What is interesting to look at is what is happening on the outer edges of this scan from today; after the signal goes to zero. We see that the signal increases a bit and it almost looks as though it could be similar to a diffraction pattern. However, I do not think this is the case.

What happens is that we get the signal by the lock-in being able to read a chopped signal and reference it with when the signal is on and off. When the excitation beam is not incident on the Si then the lock-in is not reading a chopped signal -- it is just reading a stream of signal which ends up just being noise, which is most likely what we are seeing here. It is possible to simply think of it as there being a threshold, after which point the signal does not mean anything. This is what we are seeing.
Posted by Alex at 2:51 AM 4 comments:

A Switch to Ellipsometry

Since I am running a bit short on time, we decided to move this setup today (Wednesday) from the spectroscopy setup to the ellipsometer setup to try and characterize the beam. Since the beam was probably too wide at the waist (in between the two parabolic mirrors), we placed the Si wafer in front of the receiver to look at the distribution at this position. A sketch of this is shown below (a very rough sketch... just to show placement of components). 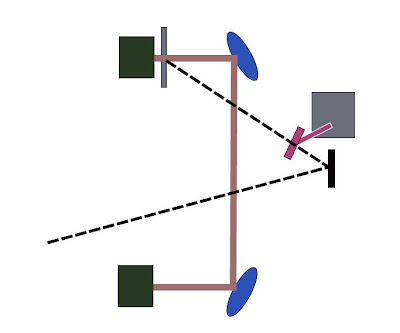 The dotted black line again represents the excitation beam, the pink components represent the lens and lens arm, which are attached to the translational stage, shown as the grey square. The darker grey squares are the emitter and receiver for the THz signal, the blue ovals are the parabolic mirrors, and the black disc represents a mirror which the excitation beam reflects off. Finally, the grey disc again represents the Si wafer.

After taking an x- and y-lateral scan over the Si wafer, I found some very interesting looking profiles, especially in the x-direction. A plot showing both directional scans is shown below.

Clearly the x-direction is very strange, while the y-direction almost looks like an upside-down parabola. The features in the x-directional scan, I think, help to reinforce the idea that perhaps the incident angle does not have much effect on the profile of the beam and that possibly the alignment of the actual microscope is what should be adjusted in order to correct any sort of skewness. In terms of the y-direction, it would be nice to take a wider range of data; and by this, I simply mean having more data points on the edges of the scan. I hope to do this tomorrow after adjusting the lens and stage.

Overall, it is very interesting to see such an odd profile in the x-direction -- and I think the most interesting thing is that the scan is extremely smooth, as opposed to some more "rigid" scans.

I also should mention that the lock-in was much less noisy in this setup than in the spectroscopy setup. Perhaps this has to do with the THz setup in general, the excitation beam, or something else. Also note that the relative amplitude is much less than what we saw in the spectroscopy setup, where we would see amplitudes of 4 or 5 mV, here we see just over 2 mV.
Posted by Alex at 2:12 AM No comments: